This series contains my notes on the free on line book Operating Systems: Three easy pieces.

As a user wants to be able to run multiple processes at once, we have to be able to create the illusion that there are as many processors as each program needs. The OS does this by virtualizing the CPU. (Executing instructions from one process and then changes to another program) This allows multiple programs to run at once. The downside is that performance is impacted.

To implement virtualization, we need both low-level machinery, called mechanisms and high-level intelligence or policies.

Mechanisms are methods or protocols that implement a needed piece of functionality.

Policies are algorithms for making some kind of decision within the OS.

Process: The abstraction provided by the OS of a running program.

To achieve process virtualization, we need a process API. This API will handle:

In order to create a process, the OS has to prepare some things beforehand. This includes:

The three main process states are: 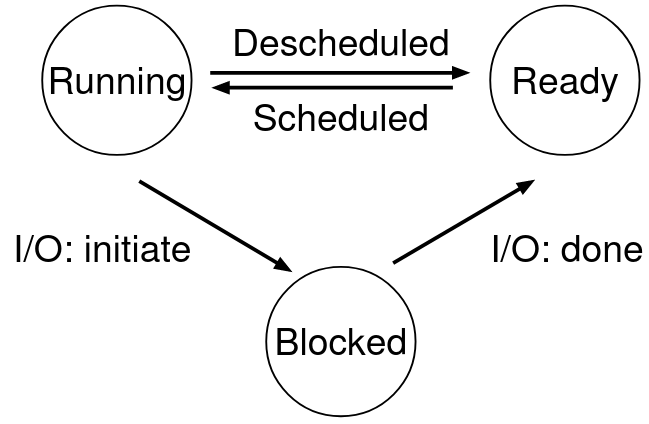 The OS has to keep track of the registers being used in the processor at a given moment, therefore, it needs a structure to store this information in. To keep track of the processes currently being executed, the OS has to keep a list of currently run processes (PCB (Process Control Block)). Every process has certain characteristics, such as PID (Process ID), Parent, State, and so on.